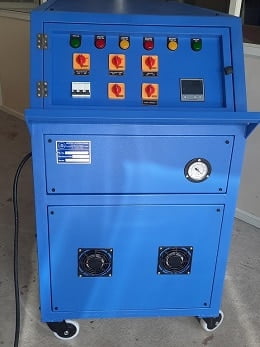 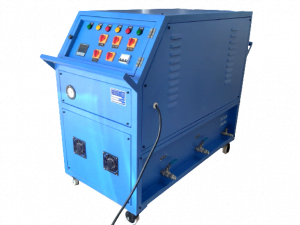 The Low Vacuum Dehydration technique is mainly used for separating moisture content from the oil which is present in three forms:

The heating of hydraulic oil is performed indirectly and then that is poured into a vacuum chamber where it is scattered into a very thin layer of film thereafter it vaporizes & gets dissolved with gases at low temperature. How do separate water from oil?

Now both air and gases that are derived from the previous process are now left to condense so that it gets separated from the oil.

Our ultimate goal of heating oil indirectly at low temperature is to ensure that there is no burn off hence no oxidation and no additional depletion of oil.

Give us a call – to Clean water from oil

The extracted low-weight molecular oil gets accumulated in the hydraulic fluid and settles in oil. Hence (LVDH) low vacuum dehydration technique is used to clear the oil & ultimately bring back oil to its original properties.

Hence under this technique, there is a vacuumed chamber and a shower arrangement for the oil (mixed with moisture content). There is a heater arrangement that heats up the oil under controlled temperature settings of a maximum of 55℃ only when the heated oil is showered inside the vacuum chamber under a high vacuum, moisture particles would get evaporated or get vaporized under the vacuumed condition thereby clearing the moisture from oil. Hence Clean oil is collected at the bottom of the chamber and delivered into the system.

REQUEST TO CALL BACK
SEND ENQUIRY
We are Online